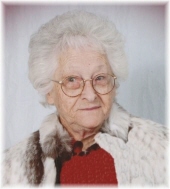 Alice Pearson, age 92, of Norman, went to be with the Lord on Monday, October 28, 2013. She was born on February 5, 1921, in Miller, Oklahoma, the daughter of George Petty and Rebecca Kendrix Petty. She was preceded in death by her first husband, Leo Summitt; her second husband, Dick Pearson; her parents; her stepmother, Ira Petty; her daughter-in-law, Freddie Pearson; one grandchild; two great-grandchildren; three brothers, Charlie Petty, Doyce Petty and Ben Petty; her sister, Harriette Honeycutt; her half-sister, Janet Ponder; and her half-brother, James Petty. She was Baptist in her faith, a homemaker, enjoyed quilting and reading and was a Senior Companion Volunteer. She was dearly loved and cherished by her entire family and she will live on in their hearts forever. She is survived by four sons and daughters-in-law, Edward and Pat Summitt of Norman, Donnie Pearson of Acorn, Roger and Debbie Pearson of Bonnerdale and Glen and Martha Pearson of Norman; two daughters and sons-in-law, Joan and Tracy Nelson of Black Springs and Georgetta and Tony Weatherford of Bonnerdale; twelve grandchildren; twenty-one great-grandchildren; one sister, Florene Graves of Norman; one half-sister, Evelyn Sheets of Idabel, Oklahoma; and numerous nieces, nephews and friends. Services will be held at 2:00 PM, Friday, November 1, 2013, in the Davis-Smith Funeral Home Chapel in Glenwood with Bro. Dale Hamilton officiating. Visitation will be held Thursday, 5:00 PM until 7:00 PM. Interment will be in the Black Springs Cemetery. Pallbearers will be her grandsons, Bennie Parker, Russell Nelson, Scott Nelson, Chris Weatherford, Andy Weatherford, Billy Pearson, Doyce Edward Summitt and Michael Rhodes. Honorary pallbearers will be Velda Qualls, Brandon and Zack Abernathy, the staff and residents of Montgomery County Assisted Living, Dr. Thomas Hollis, Jr. and the staff and nurses of Mercy Hospital 4 East and Dr. Martin Koehn and the nurses and staff of Arkansas Hospice Inpatient, 5th Floor, Mercy Hospital, Hot Springs. Guest registry is at www.davis-smith.com.

To order memorial trees or send flowers to the family in memory of Alice Pearson, please visit our flower store.