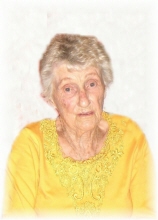 Beatrice Hollifield Stafford, youngest of 8 children born to John and Alice Hollifield on April 7, 1920, passed peacefully at her West Sacramento, California home on Thursday, March 3, 2016. Batsy was born and raised in Hopper. During World War II, she moved with her then 1-year-old daughter, Glenda Ann, to join her husband, who was working in the Vancouver, Washington shipyards. Following the war, the family moved and settled in Sacramento, California, where Grandma Bea spent the rest of her life. Beatrice will be returning home to Arkansas where she will be laid to rest. She is survived by her daughter, Glenda and her two grandchildren, Carlen Torres and Aaron Torres - Aaron was the apple of her eye. A visitation will be held Friday evening, 5:00 PM until 7:00 PM, in the Davis-Smith Funeral Home Chapel in Glenwood. A private burial will be in the Hopper Cemetery under the direction of Davis-Smith Funeral Home, Glenwood. Guest registry is at www.davis-smith.com.

To order memorial trees or send flowers to the family in memory of Beatrice Hollifield Stafford, please visit our flower store.