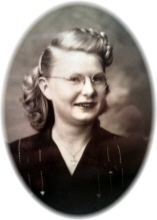 Belle "Aunt Belle" Mynier, age 89, of Morrilton, passed away on Sunday, April 5, 2015. She was born on July 20, 1925, in Seagraves, Texas, the daughter of W. T. Turner and Bertie Atkinson Turner. On Easter Sunday, April 5, 1942, seventy-three years ago, she was married to Lee A. Mynier, who preceded her in death on December 12, 1995, and how wonderful that she reunited with the love of her life on their anniversary, Easter Sunday, April 5, 2015. She was also preceded in death by her parents; three brothers; one sister; and her son, Baby Mynier. Aunt Belle loved serving her Lord and was a member of the Harding Street Church of Christ in Morrilton. Belle was a house parent for the Southern Christian Home where she loved taking care of the children. While her husband was serving in World War II, she worked in the shipyards. She enjoyed gardening, but most of all, she loved taking care of the family that she loved so dearly. She is survived by two daughters and one son-in-law, Pamela and Gary Watters of Morrilton and Linda Lee Crow of Mammoth, Montana; four grandchildren, Jeremy Watters, Angela Gilson, Maggie Mynier and Adam Crow; five great-grandchildren, Drew Watters, Aiden Watters, Jeremy Pack, Merrick Pack and Sydnie Williams; her sister, Vivian Adams of Orange Grove, Texas; numerous nieces, nephews and extended family members; and a host of wonderful friends. Services will be held at 2:00 PM, Friday, April 10, 2015, in the Kirby Church of Christ with Bro. Billy Golden officiating. Visitation will be held Friday, 1:00 PM until service time at the church. Interment will be in the Ebenezer Cemetery under the direction of Davis-Smith Funeral Home, Glenwood. Pallbearers will be Drew Watters, Aiden Watters, Jeremy Pack, Merrick Pack, Bobby Lucky and Mike Christian. Honorary pallbearers will be Gary Watters and Jeremy Watters. In lieu of flowers, memorials may be made to the Southern Christian Home, P.O. Box 649, Morrilton, Arkansas, 72110. Guest registry is at www.davis-smith.com.

To order memorial trees or send flowers to the family in memory of Belle "Aunt Belle" Mynier, please visit our flower store.