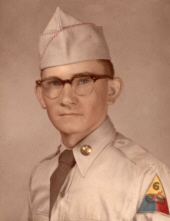 He was born on March 18, 1933, in Umpire, the son of Robert Bailey and Lydia McKee Bailey. On November 26, 1955, he was married to Pauline Golden. He was preceded in death by two sons, Robert Kelvin Bailey and Benjiman Eric Bailey; his parents; and his siblings.

Mr. Bailey was a United States Army veteran of the Korean War and a member of the Mountain View Baptist Church in Umpire. He was an avid hunter who enjoyed hunting deer and coons. He loved spending time with friends and family, especially his grandchildren.

Private services will be held in the Davis-Smith Funeral Home Chapel, Glenwood, with military honors performed by the United States Army Honor Guard.

Graveside services for all of his friends and family will be held at 3:00 PM, Tuesday, June 16, 2020, in Athens Cemetery with Bro. Gary Welch officiating.

Visitation will be held Monday, 6:00 PM until 8:00 PM, in the funeral home. Social distancing directives will be in place with no more than 50 persons at any one time in the chapel. You must avoid all physical contact and attendees 10 years of age or older must be wearing a face covering to enter.

To order memorial trees or send flowers to the family in memory of Benjiman Franklin Bailey, please visit our flower store.