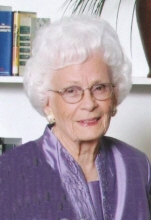 Bernice Irons, age 96, of Story, went to be with the Lord on Tuesday, December 16, 2014. She was born on February 24, 1918 at Story, the daughter of Selmer William Qualls and Anna Pearl Breshears Qualls. On June 30, 1939, she was married to Floyd Irons who preceded her in death on April 14, 2004. A member of the Story Church of God, she was involved in many church activities, especially church camp. She is survived by three children and their spouses, Bobby and Frances Irons of Story, Paula and Jeff Childs of Hot Springs and Gwena and Rob McLane of Elmer, Louisiana; five grandchildren and their spouses, Karen and Tony Tackett, Jonathan and Katie Childs, Andrew and Kendra Childs, Nathan McLane and Ann McLane; her sister, Bernell Hulsey of Grand Prairie, Texas; her brother, Bervin Qualls of Hot Springs; and her very special friend, Ronnie Wallace of Story. Services will be held at 11:00 AM, Thursday, December 18, 2014, in the Story Church of God with Bro. Roger Harper and Bro. Brian McKenna officiating. Visitation will be Thursday, 10:00 AM until service time at the church. Interment will be in Reed Cemetery under the direction of Davis-Smith Funeral Home, Glenwood. Pallbearers will be Robert McLane, Nathan McLane, Jeff Childs, Jonathan Childs, Andrew Childs, Tony Tackett and Sam Amerson. Honorary pallbearers will be the men of Story Church of God and the staff of the Montgomery County Nursing Home. Memorials may be made to the Montgomery County Nursing Home, PO Box 1208, Mount Ida, Arkansas 71957. Guest registry is at www.davis-smith.com.

To order memorial trees or send flowers to the family in memory of Bernice Irons, please visit our flower store.