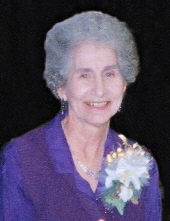 She was born on December 27, 1932, in Kelso, Washington, the daughter of Stuart W. Down and Sarah Hembree Down. On February 23, 1952, she married James Doughten who preceded her in death on December 26, 2005. She was also preceded in death by three children, Brendan Robert Doughten, Linda Faye Mitchell and Rose Etta Stauch; her parents; her brothers, Stuart Down and Jim Down; and her sisters, Grace Dunn and Mary Plummer.

After marrying James and having their seven children, James retired and he and Betty moved the family to Norman in 1985. Betty was a member of the Liberty Baptist Church. She enjoyed her flowers, gardening, taking walks and was an avid reader. She was a wonderful mother who selflessly and lovingly raised her children. She will be missed by her family and all who knew and loved her.

Cremation arrangements are under the direction of Davis-Smith Funeral Home and Crematory, Glenwood.

To order memorial trees or send flowers to the family in memory of Betty Lou Doughten, please visit our flower store.