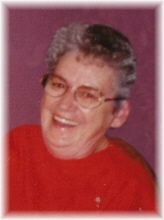 Betty Lou Jones, age 81, of Langley, died Saturday, October 18, 2014. She was born on July 13, 1933 at Amity, the daughter of Robert Alexander Whisenhunt and Nellie Lawless Whisenhunt. One October 7, 1956, she was married to Johnny Jones. She was preceded in death by her parents; her granddaughter, Sophie Elizabeth Jones, her brother, Lois B. Whisenhunt; and her sister, Rachel Raines. She was a member of the Daisy Free Will Baptist Church. Betty loved to cook and enjoyed being with her family. She is survived by her husband, Johnny Jones of Langley; four children and their spouses, Robert and Wanda Jones of Langley, Yvonna and Danny Gregory of Lodi, Melissa and Wayman Powell of Langley and Shane and Jeannie Jones of Glenwood; ten grandchildren; ten great-grandchildren; three sisters, Sybal Davis of Langley, Imogene Mack of Athens and Joyce Parker of Langley; and several nieces and nephews. Services will be held at 2:00 PM, Tuesday, October 21, 2014, in the Langley Hall Church with Bro. Kevin Jewell officiating. Interment will be in the Langley Hall Cemetery under the direction of Davis-Smith Funeral Home, Glenwood. Pallbearers will be Mark Jones, T.J. Jenkins, Eric Walker, William Hammock, Brent Staggs and Dustin Nichols. Guest registry is at www.davis-smith.com.

To order memorial trees or send flowers to the family in memory of Betty Lou Jones, please visit our flower store.