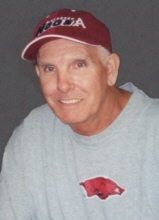 Billy Glen Draper, age 79, of Kirby, passed away Friday, May 22, 2020. He was born on November 22, 1940 in Amity, the son of William Elberg Draper and Artha Lee Mack Draper. On October 12, 1962, he married Blenda Carol Funderburk. He was preceded in death by his parents; three brothers, Harold Draper,Vernon Draper and Don Draper; one sister, Betty Jo Fant; and five brothers-in-law that were like brothers to him. Billy was a lifelong resident of Kirby/Daisy and was a member of the Daisy Church of Christ. He was a logger and in 2005, he retired from Weyerhaeuser after 30 years of service. He enjoyed watching sports, especially the Kirby Trojans, Arkansas Razorbacks and his grandchildrens and great-grandchildrens games, and spending time with his entire family. He was a summer league baseball championship coach, a news junkie and enjoyed a good political discussion. Billy was also a "jerry riggin" engineer and could repair anything. He will be missed by all who knew and loved him. He is survived by his wife, Blenda Draper of Kirby; his son, Russ Draper of North Little Rock; his daughter and son-in-law, Mindy and Mike Mooney of Bonnerdale; four grandchildren and their spouses, Jeremy and Samantha White, Amy and Chad Montgomery, Michel Mooney and Olivia Draper; four great-grandchildren, Grace White, Hunter White, Ashton Baldwin and Kileigh Montgomery; four sisters, Ima Tedder of Daisy, Lemma Sue Massey of Kirby, Melba Kennedy of Murfreesboro, and Pat Funderburk of Kirby; and numerous nieces and nephews. Graveside services will be held at 2:00 PM, Monday, May 25, 2020 in the Mount Joy Cemetery with Harold Vaughn and COL Russ Draper officiating. Pallbearers will be the Kirby Trojans 86ers and include Keith Golden, Chuck Ray, Marty Reynolds, Kyle Cowart, Mike Putz, Daniel Crump, Tim Cogburn, Jesse Don Lowery and Todd Ray. Memorials may be made to the Mount Joy Cemetery Association, 3791 Hwy 70 West, Kirby, Arkansas 71950. Arrangements are under the direction of Davis-Smith Funeral Home, Glenwood. Guest registry is at www.davis-smith.com.

To order memorial trees or send flowers to the family in memory of Billy Glen Draper, please visit our flower store.