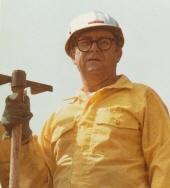 Billy J. Vaught, age 85, of Lodi passed away on Friday, August 1, 2014. He was born on December 5, 1928, in Mount Ida, the son of Miley Ervin Vaught and Artie Mae Welch Vaught. On August 11, 1950, he was married to Barba Joan Grice. He was preceded in death by his parents; and his brother, Kenneth Vaught. As a young man he traveled from Arkansas to Indiana for work picking tomatoes; was employed for several years at the Glove Factory in Glenwood and even while he was working his daily jobs, he raised chickens for many years. He was also employed with the U.S. Forest Service, where he truly loved and respected working until he retired at the age of 62. While there, he traveled on fires as a "hot shot" and although he was one of the oldest in his crews, he proudly shared stories how he was able to work twice as hard as the younger workers. He is fondly remembered by many as being "Smokey the Bear", for presentations at schools and riding his Cushman scooter in parades. He was a member of the Lodi Freewill Baptist Church and for over 50 years a member of the Buffalo Gap Masonic Lodge #484. He enjoyed beekeeping, hunting, fishing, building bird houses, and spending time outdoors tinkering and working around his house and yard. He was a wonderful husband, father, grandfather, brother and friend, who dearly loved his family and he will be deeply missed by all who knew and loved him. He is survived by his wife, Barba Joan Vaught of Lodi; his son, Dennis Vaught, Sr. and his wife, Vickie, of Athens, Texas; two grandchildren; six great-grandchildren; one great-great-granddaughter; his brother and sister-in-law, Jerald and Carmen Vaught of Angola, Indiana; numerous nieces and nephews; and a host of wonderful friends. Services will be held at 10:00 AM, Tuesday, August 5, 2014, in the Davis-Smith Funeral Home Chapel in Glenwood with Bro. Joe Ray Short officiating. Visitation will be held Monday evening, 6:00 PM until 8:00 PM. Interment with Masonic rites will be in the Lodi Cemetery under the direction of Davis-Smith Funeral Home, Glenwood. Pallbearers will be members of the Buffalo Gap Masonic Lodge #484. Guest registry is at www.davis-smith.com.

To order memorial trees or send flowers to the family in memory of Billy J. Vaught, please visit our flower store.