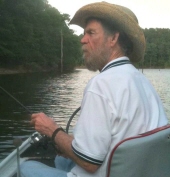 Billy Ray "Billy the Kid" Mims, age 75, of Mount Ida, passed away from cancer on Saturday, October 17, 2015, at St. Vincent Hospital, Hot Springs. He was born on July 20, 1940, the son of Turner Mims and Fannie Mae Woods Mims. He always liked to say he was born in a cornfield in Bienville Parish, known as Fryburg, Louisiana. He grew up in Sibley, Louisiana. He is preceded in death by his parents; brother, Lonnie Mims; sister, Syble Britt; a sister who passed away before he was born; his niece, Rhonda; and father-in-law, Elvie Haynes. He had eight in his graduating class. They were the "bridge sitters." I don't think any one of those boys knew they lived below the poverty level, they just had fun. One time he rode his bicycle under a moving train. His childhood was spent around the tracks, learning to swim in Brushy Creek, squirrel hunting, muddying up mud holes to catch fish; and he learned bass fishing later on. We call him "Billy the Kid" because at Christmas, birthdays, Father's day, any gift day, he wanted gifts. He would take his time savoring the unwrapping. His kids loved buying him gifts because like a kid, he wanted them. He was a coach of football and softball to many children during his own children's growing up years. He retired from the Louisiana Department of Highways as supervisor of the laboratory in Bossier City, working for them for 38 years, and retiring in 1997. He loved fly fishing and studied and bought books on the different methods. At the last, he could not do that, walking on the rocks hurt his back, so he fished in the front yard. It was not about catching the fish, it was the art of fly fishing. He loved taking and re-wrapping fishing rods, making it into an art, and he tied flies. We don't know if he got to use them all, but to him it was the art. He loved taking crow, coyote, bird calls and remaking them. He and his wife went many times at night to call up wild creatures. His wife would hide in the truck cab, but could hear those things coming through the underbrush. He is survived by his loving wife, Margaret Mims of Mount Ida; his son, Billy Scott Mims (Jade), his daughter, Kelli Dawn Mims (DT), grandchildren, Angelique (Cole), Brody, and his granddaughter who he helped raise and one that called him Dade, Brianna Rae Mims (Calum), named after him and she gave him many years of love and algebra which he studied that algebra like he did his hobbies. Also survived by three great-grandchildren he never had the chance to see, Charisma, Ireland, and Lilly, but he delighted in pictures and videos and Skyping; his sister, Dot Spencer (Ace), his niece, Cindy Spencer, his nephew, Rick and Mike (Donna) who came to see him last week, his mother-in-law, Syble Haynes, his sister-in-law, Marcy Haynes who grew up thinking he was her "brudder", and a host of great and great-great nieces and nephews, who he loved dearly. There will be no services. He was cremated and will occupy the passenger seat in the RV riding with his wife. He discussed this long before he got sick, and in fact, it was one time when his wife was very ill. Kelli, his daughter, will hold a memorial service in the Spring of 2016, to be announced at a later date for his Louisiana family & friends. Arrangements are under the direction of Davis-Smith Funeral Home, Glenwood. He was a giant among men and when one of these passes, there will never be another like him. He is missed and loved beyond anyone's conception by his 3 girl's and boy. We love you Daddy and will see you later. Guest registry is at www.davis-smith.com.

To order memorial trees or send flowers to the family in memory of Billy Ray "Billy the Kid" Mims, please visit our flower store.

Services will be announced at a later date