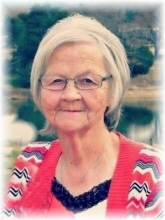 Charline "Mamaw" Voan, age 78, of Norman, died Sunday, May 17, 2015. She was born on October 19, 1936 at Little Rock, the daughter of Charles Ira Davis and Mary Elizabeth Miller Davis. She was preceded in death by her parents; her brother, Charles Ira Davis, Jr.; and her grandson, Zachary Voan. On November 24, 1955, she was married to Morris "Buddy" Voan. She was a homemaker and member of the Norman First Baptist Church. She is survived by her husband of 59 years, Morris "Buddy" Voan, Sr. of Norman; four children and their spouses, Morris "Buddy" Voan, Jr. of Texarkana, Arkansas, Cheryl and Wayne McClard of Bismarck; Chuck Voan of Glenwood and Lisa and Wayne Simpson of Norman; eighteen grandchildren; fifteen great-grandchildren; and a host of family and friends. Services will be held at 10:00 AM, Wednesday, May 20, 2015, in the Davis-Smith Funeral Home Chapel, Glenwood, with Bro. James Hughes and Bro. Robbie Loudermilk officiating. Visitation will be Tuesday, 6:00 PM until 8:00 PM. Interment will be in the Black Springs Cemetery. Pallbearers will be Trey Voan, Chris Voan, Neil Simpson, Aaron Voan, Shawn Venable, John Hackney, Jacob Cogburn and Adam Kennedy. Honorary pallbearers will be Gary Simpson, Richard Vines, Jeanine Self, Pat Hinson, and all of her friends she made through 4-H, fair association, athletics and her church. Guest registry is at www.davis-smith.com.

To order memorial trees or send flowers to the family in memory of Charline "Mamaw" Voan, please visit our flower store.