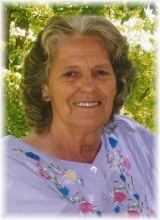 Colleen Madge Tillman, long-time resident of Kirby, went to meet our Lord, Tuesday, September 15, 2015 at the age of 77. The youngest of four children, she was born to the late Basil O'Brian Stuart and Thelma Reidhead Stuart on July 21, 1938 near St. Johns, Arizona. Colleen married George (Bud) Prince Tillman, of Okolona, AR, on February 21, 1954 in McNary, Arizona. Colleen was preceded in death by her parents, and her siblings Ruby Stuart Hussey, Jack Stuart, and Jerry Stuart. A vibrant and tenacious woman with a dazzling smile, Colleen's family was her greatest passion. Her heart sang anytime she could get the family together and her eyes twinkled with pride around her children and grandchildren. She spent many days at the horse shows, carefully watching and cheering on her grandchildren. She adored Christmas, when trimming the house with her expansive collection of decorations was a joyousand lengthy!occasion; and she always fussed over whether or not anyone was getting enough to eat, including, especially, each of her beloved pets. Colleen attended Daisy Free Will Baptist Church and took great delight in hosting family and friends for impromptu musical gatherings. She was just as enthralled by this lively chorus as she was by the quiet challenge of a good puzzle. A long-time appreciator of antiques, Colleen celebrated the beauty in absolutely everything, and lived her life based on that notion: that there is much to celebrate! She is survived by her loving husband, Bud, and her children and spouses; Donnie and Teena Tillman, of Kirby, AR, Chery and David Roberts of Yadkinville, NC, Tammy and Robert Heinz, of Hattiesburg, MS, and Renanda and Mike Bailey, of Kirby, AR. She is also survived by sixteen beautiful grandchildren, twenty-three great-grandchildren, a multitude of long-time friends and, of course, her Bichon Fris, Sassy. Services will be held at 10:00 AM, Saturday, September 19, 2015, in the Daisy Free Will Baptist Church with Bro. Kevin Jewell officiating. Visitation will be held Friday, 6:00 PM until 8:00 PM, at Daisy Free Will Baptist Church. Interment will be in the Bear Creek Cemetery under the direction of Davis-Smith Funeral Home, Glenwood. Pallbearers will be Brian Tillman, Wesley Tillman, David Roberts, Stephen Heinz, Whitson Howie, III, Brian Holder, Gary Bailey and Shane Bailey. Guest registry is at www.davis-smith.com.

To order memorial trees or send flowers to the family in memory of Colleen Madge Tillman, please visit our flower store.