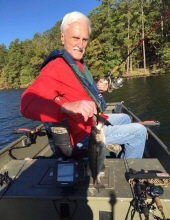 He was born October 1, 1930, in Vancouver, Washington, the son of Earl Beard and Freida Sharp Beard who preceded him in death.

Curtis’ family moved to Arkansas in his youth and raised him and his older brother, Rex, until their teens. They then moved to Quincy, California, where at the age of 18, Curtis enlisted in the U.S. Navy and served four years. Upon returning home to Quincy in 1952, he met and married Wilma Tims. Together they had son Loren Beard and daughter Debbie Beard Leech. The family moved to Arkansas in 1967 when Curtis began work for Reynolds Aluminum/Alcoa until his retirement. In Arkansas, son Mitchell Beard was added to the family in 1973. He was an active member and deacon of Pleasant Hill Assembly of God, later renamed Lake Hamilton Assembly until his passing. Curtis was well known for his love of church, family and fishing.

He is survived by his wife of 68 years, Wilma Beard; sons and daughters-in-law, Loren (Regina) Beard and Mitchell (Shelly) Beard; daughter and son-in-law, Debbie (Ed) Leech; numerous grandchildren and great-grandchildren; and many nieces and nephews, friends and his church family.

To order memorial trees or send flowers to the family in memory of Curtis Earl Beard, please visit our flower store.