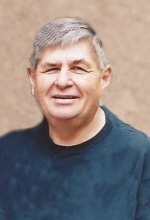 Frank Daniel "Dan" Long, Sr., age 73, of Salisbury, Maryland, passed away peacefully with his loving family by his side on Wednesday, March 16, 2016. He was born on August 16, 1942, in Bisbee, Arizona, the son of Morley Everett Long and Lola Mae Cate. On July 14, 1963, he was married to the true love of his life, Evelyn Jean Duggar. He was preceded in death by his parents. He received his Master's in Poultry Science from the University of Arkansas (U of A) and was Baptist in his faith. "I just know stuff" or "I read the book" were the answers he would often give when people would wonder how in the world he knew that obscure fact about almost any topic being discussed. He was intelligent, creative, ingenious, and a visionary. He had a passion for poultry and worked in the poultry industry his entire adult life. He also taught Poultry Science in his local community college for 8 years, and loved it! He would save stacks and stacks of newspapers to teach his students about how current events affect the poultry industry. Dan could be described as a self-motivated leader, who was always curious of the "whys" and the "what ifs" and this was evident in both his love of teaching as well as his love of research. Whether it was a Sunday School class, or a college class, he took great joy in challenging his students to the "whys" and "what ifs". Research also allowed him to fulfill his personal quest to answer his own "why" and "what if". In fact, at times Evelyn lovingly remembers pungent odors coming from the basement of their home of anything from chicken manure, to egg shells. Because of his tireless work in research with egg shells, he mastered a treatment for both arthritis and fibromyalgia, securing and owning two patents for this work. Dan loved his wife, children, grandchildren, and great-grandchildren, and would've given all of his worldly possessions to them if needed. Evelyn cherishes the everyday things Dan enjoyed doing for her, like keeping her car full of gas just so she wouldn't have to pump it herself, and writing her poetry. Dan also had a love for sports! He played tennis, golf, basketball, and softball, and loved teaching his wife and children everything he knew about tennis. Any time spent with his brother, Morris, was special to him and he especially cherished the time he and Morris spent fishing and hunting together. Dan was very close to all of his siblings, thought so highly, and loved so dearly Morris, Mary, and Ann! Dan was also king of the puns, which some of those went over better than others. His dry wit was definitely passed down to some of his children and grandchildren. We will all deeply miss him. He is survived by his wife of 52 years, Evelyn J. Long of Salisbury, Maryland; one son and daughter-in-law, Danny and Shala Long; three daughters and two sons-in-law, Terri and John DeClerck, Cheryl Rapp and Dana and Scott Wilcox; twelve grandchildren, Spencer, Kyle, Mackenzee, Alyssa, Allie, Christopher, Savannah, Elizabeth, Haylee, Anderson, Howie and Lilly; two great-grandchildren and one on the way, Molly and Jude; one brother and sister-in-law, Morris and Katie Long; two sisters and one brother-in-law, Mary Jones and Ann and Jack Henderson; numerous nieces, nephews and extended family members; and a host of wonderful and loving friends. Services will be held at 2:00 PM, Sunday, March 20, 2016, in the Davis-Smith Funeral Home Chapel in Glenwood with Bro. Roger Brumley officiating. Visitation will be held Sunday, 1:00 PM until service time. Interment will be in the Grant's Chapel Cemetery under the direction of Davis-Smith Funeral Home, Glenwood. Pallbearers will be Scott Wilcox, Randy Mitchell, Brian Huntington, Chad Long, Mike Duggar and Jack Henderson. Guest registry is at www.davis-smith.com.

To order memorial trees or send flowers to the family in memory of Dan Long, please visit our flower store.