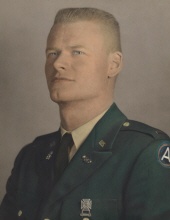 He was born on May 10, 1936, in Murfreesboro, the son of the late Numan Smedley and Goldie Dickerson Smedley.

Dick was a graduate of Henderson State Teachers College in Arkadelphia. He was united in marriage to his first wife, Ocie Sigley, in Kingwood, West Virginia, and his second wife, Ann Smedley in Magnet Cove.

Dick was a retired United States Army Lieutenant Colonel, serving twenty-six years on active and reserve duty in the Army Chemical Corps and Military Police branches. He was a veteran of the Vietnam War and served in duty stations in Korea, Germany, and the United States. Dick was a proud paratrooper and explosive ordnance disposal supervisor. An avid fisherman, Dick loved the water and being outdoors in his free time. He was a member of the Veterans of Foreign Wars, the American Legion, and the Disabled American Veterans.

He is survived by his son and daughter-in-law, LTC (retired) Tom and Amy Smedley; his daughter and son-in-law, Renee and Bill Heschl; four grandchildren, Anneliese Heschl, Connor Smedley, Rylie Smedley and William Heschl; his sister, Patricia Smedley of Glenwood; and his two ex-wives, Ann Smedley and Ocie Sigley.

Memorial services will be held at 10:00 AM, Wednesday, July 21, 2021, in the Davis-Smith Funeral Home Chapel, Glenwood with Bro. Bobby Lock officiating.

Interment with military honors will be held on Thursday, July 22, 2021, at 10:00 AM, in the Arkansas State Veterans Cemetery in North Little Rock.

To order memorial trees or send flowers to the family in memory of Dick L. Smedley, please visit our flower store.

Interment with military honors in the Arkansas State Veterans Cemetery - Thursday - July 22, 2021 at 10:00 AM