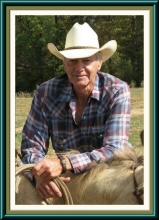 Dwayne Hammock, age 68, of Athens, passed away on Saturday, July 23, 2016. He was born on September 27, 1947 in Nashville, the son of William Doyle Hammock and Ova Simmons Hammock. He was preceded in death by his mother. On November 14, 1969, he was married to Sherry Tipton. A United States Army veteran, he was wounded in Vietnam and received the Purple Heart. He was a member of the Pleasant Grove Free Will Baptist Church. Dwayne was a cowboy at heart. He loved his horses and any activity that involved horses or a western way of life. He also enjoyed working his cattle. He is survived by his wife, Sherry Hammock of Athens; two sons, Chad Hammock of Athens and Cole Hammock of Langley; his father, Doyle Hammock of Newhope; his sister and brother-in-law, Maxine and Mark Story of Newhope; several nieces and nephews; and a host of friends. Services will be held at 2:00 PM, Tuesday, July 26, 2016, in the Pleasant Grove Free Will Baptist Church with Bro. Kenny Fant, Bro. Jaron Tipton and Bro. Scott Feemster officiating. Visitation will be Monday, 6:00 PM until 8:00 PM, at the funeral home. Interment will be in Athens Cemetery under the direction of Davis-Smith Funeral Home, Glenwood. Pallbearers will be Charlie Smith, Bennie Simmons, Sid Smith, Donnie Manasco, Junior Nolan and Kent Manley. Guest registry is at www.davis-smith.com.

To order memorial trees or send flowers to the family in memory of Dwayne Hammock, please visit our flower store.