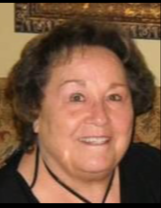 Eleonore “Ellen” Zampieri Pruitt passed away peacefully on January 7, 2022 in Little Rock, Arkansas.  She was born on February 21, 1938 in Stuttgart, Germany to Otto and Luise Zampieri; during World War II.

She met her husband, Bartis O. Pruitt, while he was stationed in the U.S. Army there.  She was the only family member that came to live in the United States in November 1963.  Bartis and Ellen reunited and later married on April 25, 1964 at the Antioch Community Church in Beebe, Arkansas. They eventually settled in Little Rock, Arkansas in 1969.  Also, Ellen became a U.S. Citizen in 1981.

Ellen was a homemaker for several years, and then worked in retail.  She retired from Casual Corner (Little Rock) in December 2003, after her only grandchild was born.  Bartis and Ellen celebrated their 50th wedding anniversary on April 25, 2014, before Bartis passed away on August 10, 2014.

She is survived by daughters, Caroline (Kirk) Ashe of Little Rock, Angela Pruitt of North Little Rock, grandson, Nicholas Schaefer of Little Rock, sisters Helga Suma and Siegi Mock, both of Germany, plus many nieces and nephews on both sides of the Atlantic Ocean.

A private family graveside service will be held at 2:00pm on Thursday, January 13, 2022, at Antioch Cemetery in Beebe, Arkansas.  In lieu of flowers, please donate to your local or favorite animal shelter.

To order memorial trees or send flowers to the family in memory of Eleonore Pruitt, please visit our flower store.