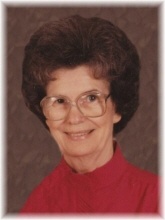 Elmeda Conine, age 86, of Amity, died Wednesday, January 1, 2014. She was born on May 26, 1927, at Alpine, the daughter of Fred Wilson and Josie Caruthers Wilson. On September 19, 1942, she was married to Charles Conine who preceded her in death on January 3, 2011. She was also preceded in death by two brothers, Ben Wilson and John Wilson. She was a member of the Amity Assembly of God Church. She is survived by three children and their spouses, Freddy and Debbe Conine of Maumelle, Regina and Mike Evans of Glenwood and Keith and Debbie Conine of Little Rock; six grandchildren, Dr. Shayne Conine, Allison Burks, Mark Conine, Heather Vaughn Bankhead, Brittany Conine and Brian Conine; seven great-grandchildren; and three brothers, Loy Wilson, Doy Wilson and J. C. Wilson, all of California. Services will be held at 2:00 PM, Saturday, January 4, 2014, in the Amity First Assembly of God Church with Bro. David Walker officiating. Visitation will be held Friday evening, 6:00 PM until 8:00 PM, at the funeral home. Interment will be in the Jones Cemetery under the direction of Davis-Smith Funeral Home, Glenwood. Pallbearers will be Brian Conine, Johnny Conine, Mark Conine, Kyle Burks and Mark Burks. Guest registry is at www.davis-smith.com.

To order memorial trees or send flowers to the family in memory of Elmeda Conine, please visit our flower store.