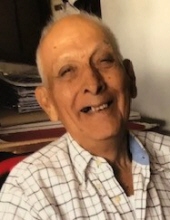 Steve was born on December 26, 1931, in San Antonio, Texas, the son of Juan Arocha and Guadalupe Rodriquez Arocha. On October 23, 1951, he married his sweetheart, Velma Lucille Golden, who preceded him in death. He is also preceded in death by his parents; two sons, Stanley Arocha and baby Perry Arocha; his sister, Pauline Arocha Rodriquez; and three brothers, Antonio Arocha, Juan Arocha, and Raul Arocha.

He retired from the Arkansas State Highway & Transportation Department after 20 years of service. I can remember comments from his Supervisors and co-workers through the years that Steve was a “model employee and worker” and received recognition for it at his retirement ceremony.

Steve, (Dad & PawPaw) enjoyed fishing with Mom and our family. He really enjoyed working, being outdoors, and riding his 4-wheeler/ATV. He cherished his granddaughters, great-granddaughter and daughter-in-law, or better known as “his girls”. He got to spend some time at our home and while in the State Veterans Home visiting with his great-granddaughter, Mia Claire.

Dad and PawPaw always had time to be with each of us and we did the same for him. There is a large void in all of our lives now with his passing but all of the wonderful times that we had with him in life and his memories will live on in our hearts forever. I can visualize seeing Dad/PawPaw and Mom/Granny being “Model Angels” with Stan and baby Perry in Heaven now.

He is survived by his son and daughter-in-law, Jerry and Sally Arocha of Cabot; two granddaughters, Amanda Arocha and Christina (Justin) McCormic; one great-granddaughter, Mia Claire McCormic; nieces, nephews, extended family members and many good friends.

Graveside services will be held on Saturday, January 23, 2021 at 2:00 PM in the Athens Cemetery with John Hall and Royce Golden officiating.

Visitation will be Friday from 6:00 PM until 8:00 PM in the Davis-Smith Funeral Home Chapel, Hot Springs. Social distancing directives will be in place with 66% capacity in chapel and face covering must be worn.

Guest registry is at www.davis-smith.com

To order memorial trees or send flowers to the family in memory of Esteban "Steve" Arocha, please visit our flower store.