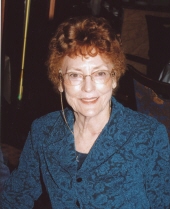 Flossie M. Lowery, age 84, of Albert Pike, went to be with her Lord, Saturday, November 29, 2014. She was born on November 25, 1930 at Langley, the daughter of Roy Oscar Graves and Dora Elizabeth White Graves. On July 14, 1948, she was married to James Lowery who preceded her in death on March 27, 2001. She was also preceded in death by her parents; two brothers, David Graves and Booker Graves; and six sisters, Versa Davis, Verna Hollis, Eunice Houser, Nellie Pinson, Margie Pate and Wanza Smith. Flossie was a member of the Mt. Pleasant Missionary Baptist Church and owner and operator of Lowery's Camp Albert Pike Store, Cabins and RV Park. The store built in 1959 was operated by James and Flossie until their retirement in 1991. She enjoyed going to church activities, cooking, painting, singing, traveling, shopping and being with her family. She is survived by her daughter and son-in-law, Janice and Denver McRae of Hot Springs; her granddaughter, Jamie Marie Koonce of Hot Springs; two step-grandchildren, Deann Grintz and her husband, Jason, of Ivanhoe, Texas and John McRae of Glenwood; two step-great-grandchildren, Garrett Grintz and Samuel Grintz; and many nieces and nephews. Services will be held at 10:00 AM, Wednesday, December 3, 2014, in the Langley Hall Church with Bro. Keith Shewbart and Bro. Harold Turner officiating. Interment will be in the Langley Hall Cemetery under the direction of Davis-Smith Funeral Home, Glenwood. Visitation will be Tuesday evening, 6:00 PM until 8:00 PM. Pallbearers will be Bill Sams, Fred Whitson, Brian Pounds, Bob Morphew, Jeff Turner, Roger York, Eugene Pate and Brady Gore. In lieu of flowers, memorials may be made to the Langley Hall Cemetery Association, c/o Patsy Morphew, 915 Hwy 369 North, Langley, Arkansas, 71952. Guest registry is at www.davis-smith.com.

To order memorial trees or send flowers to the family in memory of Flossie M. Lowery, please visit our flower store.