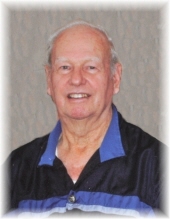 Harloe C. White, age 81, of Kirby, died Saturday, February 8, 2014. He was born on March 21, 1932 at Mounds, Oklahoma, the son of Howard White and Sylvia Hawkins White. On September 2, 1954, he was married to Mary Tolleson. He was preceded in death by his parents; his brother, Gene White; his half-brother, Owen White; and his half-sister, Martha Walker. He was a retired water well driller and United States Army veteran. For the past 57 years, he served as a minister at the Kirby Church of Christ and over 40 years as a church elder. He was an avid fisherman. Not only was Harloe White known for his skills at fishing, he was also known to be a fisher of men. He is survived by his wife, Mary White of Kirby; two children and their spouses, Stanley and Ellen White of Texarkana, Texas and Myra and Bob Ligon of Kirby; five grandchildren, Ann White, Molly Latham, Sarah Hardage, Mary Davis and Mark Ligon; three great-grandchildren, Wesley, Eli and Tyler; three brothers, Bob White of Kirby, Forrest White of Murfreesboro and Gilbert White of Georgia; two sisters, Ilena King and Sylvia White, both of Kirby; and several nieces and nephews. Services will be held at 10:00 AM, Wednesday, February 12, 2014, in the Kirby Church of Christ with Buddy Ray and Billy Golden officiating. Visitation will be held Tuesday evening, 6:00 PM until 8:00 PM, at the funeral home. Interment will be in the Ebenezer Cemetery under the direction of Davis-Smith Funeral Home, Glenwood. Pallbearers will be Pete Pedron, Brent Turner, Bill Tolleson, Billy Wayne Funderburk, Donnie Reid, Ted White, Marty Pipkins and Mark Foshee. Honorary pallbearers will be Joe Mason and John Wayne Walker. Guest registry is at www.davis-smith.com.

To order memorial trees or send flowers to the family in memory of Harloe C. White, please visit our flower store.