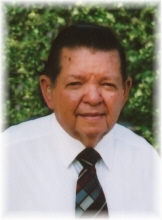 Harlon Duren, age 85, of Kirby, passed away on Saturday, February 27, 2016. He was born on October 9, 1930, in San Angelo, Texas, the son of Gilbert Harlon Duren and Lou V. Ross Duren Candler. On June 18, 1954, he was married to the love of his life, Jean Cowart. He was preceded in death by his parents; and four sisters, Tommie Lou Gruber, Betty George, Bonnie Duren and Linda Brewer. He was a member of Bethlehem Missionary Baptist Church in Kirby, where he served as Deacon since 1976 and was Treasurer and Sunday School Teacher for many years. A U.S. Army veteran, he worked as a heavy equipment operator for several years, was Pike County Justice of the Peace from 1975 until 1979 and served as Pike County Judge from 1979 until 1988. He was a member of the Glenwood Masonic Lodge #662 and a member of the National Democratic Party. He enjoyed gardening, hunting, fishing and spending time with his family. Harlon was the true meaning of a dedicated and beloved husband, dad and Papa, and will be deeply missed by all, but he has left his family with a wonderful legacy and countless cherished memories that will remain in each of their hearts forever. He is survived by his wife, Jean Duren of Kirby; his son and daughter-in-law, Keith and Diane Duren of Hollywood; his daughter, Lisa Duren of Kirby; two grandsons, Wes Duren of Arkadelphia and Cliff Duren of Hot Springs; two brothers and one sister-in-law, Larry and Sharon Candler of Denton, Texas and Melvin Duren of Kirby; three sisters and two brothers-in-law, Dortha Kersey of Glenwood, Joyce Nell and Joyce Tolleson of Kirby and Brenda and Bill Barnes of Murfreesboro; numerous nieces, nephews and extended family members; and a host of wonderful friends. Services will be held at 2:00 PM, Wednesday, March 2, 2016, in the Bethlehem Missionary Baptist Church with Bro. Bobby Golden and Bro. Jack Herring officiating. Visitation will be held Tuesday evening, 6:00 PM until 8:00 PM, at the funeral home. Interment with Masonic services by Glenwood Masonic Lodge, #662 will be in the Bear Creek Cemetery under the direction of Davis-Smith Funeral Home, Glenwood. Pallbearers will be Kevin Fant, Doak Dodson, Wes Duren, Cliff Duren, Lynn Tolleson and Wes Johns. Honorary pallbearers will be his dear friends, Joyce Tolleson, Gerald Grant, Sonny Tolleson, Danny Walker, Gene Horn, Mike Funderburk and Lee Whisenhunt. In lieu of flowers, memorials may be made to the Bear Creek Cemetery Association, c/oJudy Finney, P.O. Box 71, Kirby, Arkansas, 71950. Guest registry is at www.davis-smith.com.

To order memorial trees or send flowers to the family in memory of Harlon Duren, please visit our flower store.