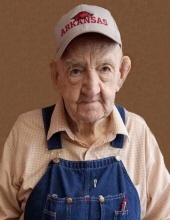 He was born on March 9, 1930 in Mount Ida, the son of Gilford Scott and Julia Ann Wheeler Scott. On December 4, 1959, he was married to Oma Scott who preceded him in death on October 8, 2002. He was also preceded in death by his parents; one brother, Morris Scott; and two sisters, Gertie Scott and Eva Youngerman.

A retired logger, he was also the former pastor of Mount Zion Church and Community Christian Center. He enjoyed fishing, camping, deer hunting and working in his garden. He loved listening to gospel music, family gatherings and a good domino game.

He is survived by two sons and daughters-in-law, Benny and AnnaMarie Walters of Hot Springs, Montana and Ross and Sharon Walters of Pelion, South Carolina; five daughters and four sons-in-law, Mary and Michael Basic of Bella Vista, Martha and David Wagner of Oden, Virginia and Doyle Docken of La Crescent, Minnesota, Freda Miller of Magnet Cove and Judy and David Hughes of Vilonia; twenty-two grandchildren; thirty-five great-grandchildren; and twelve great-great-grandchildren.

Services will be held at 10:00 AM, Wednesday, July 29, 2020, in the Davis-Smith Funeral Home Chapel, Glenwood, with Bro. Ralph Hamilton officiating.

Social distancing directives will be in place. At all services, you must avoid physical contact. Attendees 10 years of age or older must wear a face covering at all times.

Interment will be in Owley Cemetery near Mount Ida.

The family would like to thank Dr. Matthew Hulsey and staff, Elite Hospice and Home Health, Vicki Brown and Janet Fought.

To order memorial trees or send flowers to the family in memory of James G. Scott, please visit our flower store.