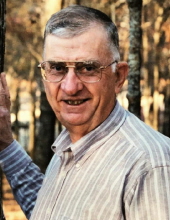 He was born on December 7, 1942 in Mayflower, the son of Irving Shelby and Lois Draper Shelby. On April 8, 1966, he was married to Betty Jean Gregory. He was preceded in death by his parents; two half-brothers, Irving “Junior” Shelby and Gerald Shelby; and his sister, Joyce Wilson.

A United States Army veteran, he was a retired roofer and Missionary Baptist minister. He had pastored and preached at many area churches. He enjoyed gardening, hunting and loved being with his grandkids.

Graveside services with military honors will be held at 10:00 AM, Saturday, January 2, 2021, in the Bear Creek Cemetery with Bro. Raymond Dees officiating.

To order memorial trees or send flowers to the family in memory of James "Jim" Shelby, please visit our flower store.