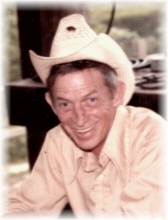 James "Tex" Burgess, age 84, of Glenwood, died Friday, February 13, 2015. He was born on August 9, 1930 at Glenwood, the son of H. E. Burgess and Pearl Coffman Burgess. He was preceded in death by his parents; two brothers, Clarence Burgess and Dean Burgess; and his sister, Maudy Myers. He was a retired house painter. A Christian in his faith, as a young man, he was saved and baptized in the Caddo River. He enjoyed sitting and visiting with all of his friends. He is survived by three sons, George Burgess and Danny Burgess, both of Texas and David Burgess of Oklahoma; three grandchildren; three great-grandchildren; his brother, Doyle Burgess; his sister, Elsie White, both of Glenwood; and several nieces and nephews. Services will be held at 2:00 PM, Sunday, February 15, 2015, in the Davis-Smith Funeral Home Chapel, Glenwood, with Bro. J. B. Evans officiating. A private burial will be held in County Line Cemetery. Honorary pallbearers will be nurses, nurse's aides and staff of Glenwood Nursing and Rehabilitation. Guest registry is at www.davis-smith.com.

To order memorial trees or send flowers to the family in memory of James "Tex" Burgess, please visit our flower store.