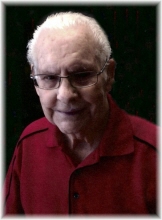 Jarrell Dee "Dick" Foshee, age 89, of Glenwood, passed away, Thursday, December 24, 2015. Dick was born on January 3, 1926 at Glenwood, the son of Marvin Foshee and Ruth Hughes Foshee. He was preceded in death by his parents; and two sisters, Anna Marie Sutton and Kathleen McCutcheon. While attending Norman High School, he was drafted at the age of 17 into the United States Navy where he served in the South Pacific during World War II. He became a Seaman First Class and was trained as an assault landing craft operator. At the end of the war, he attended telegraphers school under the G.I. Bill program. He was employed with Missouri Pacific Railroad until his retirement. He also ran several flea markets in Hot Springs and the central Arkansas area, particularly at the old K-Mart on Central Avenue and the Skating Rink on Higdon Ferry Road. He is survived by his wife of 63 years, Verna "Chub" Foshee; his brothers-in-law and sisters-in-law, Denman and Gladys "Pookie" Sanders, Philip and Anna Jo Klopfenstein and Betty Duke, all of Glenwood; and several nieces and nephews. Services will be held at 10:00 AM, Monday, December 28, 2015, in the Davis-Smith Funeral Home Chapel, Glenwood, with Harold Vaughn officiating. Visitation will be held on Monday, 9:00 AM until service time, at the funeral home. Interment will be in the Glenwood Cemetery. Pallbearers will be Larry Sanders, Tracy Robbins, Kyle Sutton, Charles Hunt, Carl Hunt and Christopher Nichols. Guest registry is at www.davis-smith.com.

To order memorial trees or send flowers to the family in memory of Jarrell Dee "Dick" Foshee, please visit our flower store.