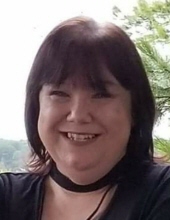 She was born on June 11, 1975, in Hot Springs, the daughter of James Murders and Patsy Ward Murders. On February 3, 2017, she married Eric McKinnon.

In 1993, Jennifer graduated from Mountain Pine High School and she worked as receptionist for Suburban Propane in Malvern.

She is survived by her husband, Eric McKinnon of Malvern; her son, Ethan Robertson of Mountain Pine; her parents, James and Patsy Murders of Mountain Pine; her sister and brother-in-law, Christy and Derek Suit of Bauxite; two nephews, Zachary Suit and Josh Suit; numerous extended family members and a host of wonderful friends.

Graveside services will be held at 10:00 AM, Friday, June 19, 2020, in the Ward Edition Cemetery, near Mountain Pine with Bro. Joe Thompson officiating.

The arrangements are under the direction of Davis-Smith Funeral Home, Hot Springs.

To order memorial trees or send flowers to the family in memory of Jennifer Victoria McKinnon, please visit our flower store.