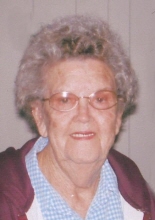 Jessie Inez Roberts, age 93, of Searcy, formerly of Newhope, passed away on Monday, May 7, 2012 at the Byrd Haven Nursing Home. She was born on January 29, 1919 at Newhope in Pike County, the daughter of Otis Smalling and Plena Aylor Smalling. She graduated from Newhope High School in 1937. On December 17, 1942, she married George Austin Roberts, who was serving in the Navy. As a Navy wife, Jessie followed her husband for assignments all over the country. Over a twenty year period, they lived in California, Rhode Island, North Carolina, Oregon and Washington state, finally returning to Arkansas upon George's retirement. Jessie was a member of the Church of Christ. She was a devoted wife to her husband and a nurturing mother to her sons. She was a skilled seamstress and she excelled in the many crafts that she took up over the years. In addition to her parents, she was preceded in death by her husband, George; two brothers, J. D. and Doyce; and her sister, Floyce. She is survived by two sons and daughters-in-law, Stephen and Ruth Roberts of Alexandria, Virginia and Gary and Rhonda Roberts of Searcy; four grandchildren, Jennifer Steck, Austin Roberts, Nathan Roberts and Jin Yao Roberts; two great-grandchildren, Ellen Bridgeman and Samuel Bridgeman; her sister, Lovena Smith of Greenbrier; her brother, Clell Smalling of Canton, Texas; and many extended family and friends whom she dearly loved. Services will be held at 10:00 AM, Saturday, May 12, 2012 in the Davis-Smith Funeral Home Chapel, Glenwood. Visitation will be Saturday, 9:00 AM until service time. Interment will be in the Liberty Cemetery near Newhope. Pallbearers will be Nathan Roberts, Gary Roberts, Steve Roberts, Austin Roberts, Lynn Roberts and Clell Smalling. Guest registry is at www.davis-smith.com.

To order memorial trees or send flowers to the family in memory of Jessie Inez Roberts, please visit our flower store.