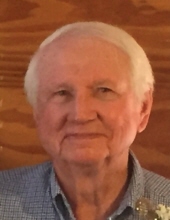 Joe was born on March 8, 1940, in Marshall, the son of Alford Glen Blair and Mildred Hazel Smith Blair. On August 19, 1967, he married Wilma Cantrell. He is preceded in death by his parents; and one sister, Sue Mathison.

Immediately after high school, Joe served in the Army before attending and graduating with a degree in Forestry from the University of Arkansas at Monticello. Joe had a long career in timber management with the United States Forestry Service and was a fire boss fighting numerous fires across the United States. Joe started his career in timber management at the Caddo District in Glenwood, then later worked in the Winona District in Perryville and Sumter National Forrest in Walhalla, South Carolina. His last transfer with the Forestry Service brought him to the Ouachita District based in Mena, Arkansas where he retired in 1998 after more that 35 years of service.

Joe was a very giving family man and an avid Razorback fan. He had a dry sense of humor and he loved his children and grandson with all his heart. He will be greatly missed by all that knew and loved him.

He is survived by his wife of 54 years, Wilma Blair of Hot Springs; his son and daughter-in-law, John Christopher and Dana Blair of Mountain View; his daughter, Becky Blair of Maumelle; his grandson, Kaleb Blair of Conway; two brothers and sisters-in-law, Bob and Debbie Blair and Bill and Maryland Blair all of Marshall; nieces, nephews, extended family members and a host of wonderful friends.

Interment will be in the Dongola Cemetery, Marshall, Arkansas.

To order memorial trees or send flowers to the family in memory of Joe Max Blair, please visit our flower store.