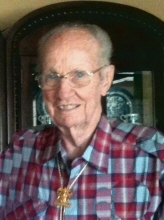 John W. Diggs, age 88, of Mount Ida, died Wednesday, March 5, 2014. He was born on July 13, 1925 at Caddo Gap, the son of Frank Diggs and Daisy Agnes Driggers Diggs. He was preceded in death by his parents; two brothers, Johnny Diggs and Carl Kinsey; and one sister, Betty Richmond. He was a United States Army veteran of World War II and Purple Heart recipient. He was a retired Orange County, California animal control officer, a 32nd degree Mason and Shriner. He was a member of the Lake Ouachita Baptist Church, Gideon's International and was active in the Mount Ida Senior Citizens Center. He is survived by his wife, Phyllis Diggs of Mount Ida; three daughters and two sons-in-law, Carolyn and Nick Pennella of La Habra, California, Barbara and Ed McCluskey of Freedom, Pennsylvania and Lois Morrow of Brea, California; two step-children, Kevin Bailey of Bolivar, Missouri and Denise Baker of Rogers; twelve grandchildren; sixteen great-grandchildren; two brothers, Jewell Kinsey of Bowie, Texas and Charles Harris and his wife, Mary, of Decatur, Texas; and one sister, Zella Harris of Denton, Texas. Memorial services will be held at 2:00 pm, Saturday, March 8, 2014, in the Lake Ouachita Baptist Church with Bro. Ty Huitt officiating. In lieu of flowers, memorials may be made to the Meals on Wheels, in care of the Mount Ida Senior Citizens Center. Arrangements are under the direction of Davis-Smith Funeral Home, Glenwood. Guest registry is at www.davis-smith.com.

To order memorial trees or send flowers to the family in memory of John W. Diggs, please visit our flower store.