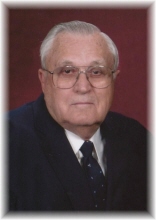 L Z Watson, age 91, of Glenwood, passed away, Monday, March 14, 2016. He was born on August 25, 1924 in the Salem community near Glenwood, the son of Clifford Watson and Clara Dingler Watson. On November 2, 1946, he was married to Imogene Wisdom Watson who preceded him in death on January 31, 2011. He was also preceded in death by his parents; two brothers, Lloyd Watson and Raymond Watson; and his sister, Lucille Watson. He was an agriculture teacher and taught in Norman Public Schools, Caddo Hills Public Schools and eventually retiring from Kirby Public Schools. After retirement, he was employed as a park ranger at Lake Greeson for the Army Corp of Engineers. He was an Army Air Corp veteran of World War II and a member of the Glenwood First Baptist Church. L Z loved to sing. He sang bass with the Friendly Five Quartet and was very active in convention singings across the state. For several years, he served as president of the Pike County Singing Convention. He always felt that music was his way of spreading the gospel. He is survived by his son and daughter-in-law, Ed and Kathy Watson of Little Rock; his daughter, Debbie Johnson of Hot Springs; four grandchildren, Katie Watson and Mason Watson, both of Little Rock, Scott Johnson, Amy Burns and her husband, Steven, all of Hot Springs; three great-grandsons, Clayton Burns, Harrison Burns and Bennett Johnson; one brother and three sisters-in-law, Travis and Sue Watson of Hot Springs Village, Jacquie Watson of Sapulpa, Oklahoma and Delma Yancey of Reklaw, Texas; and many nieces and nephews. Services will be held at 10:00 AM, Thursday, March 17, 2016 in the Glenwood First Baptist Church with Bro. Bernard Rusert officiating. Visitation will be Wednesday, 6:00 PM until 8:00 PM, at the funeral home. Interment will be in Salem Cemetery under the direction of Davis-Smith Funeral Home, Glenwood. Pallbearers will be Scott Johnson, Steven Burns, Mason Watson, Ron Graves, Jim Morphew and Larry Hutson. Guest registry is at www.davis-smith.com.

To order memorial trees or send flowers to the family in memory of L Z Watson, please visit our flower store.