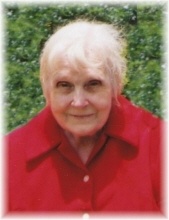 LaVerne Adams, age 86, of Glenwood, died Tuesday, February 4, 2014. She was born on December 9, 1927, at Glenwood, the daughter of Caleb Washington Waggoner and Lillie Beatrice Smith Waggoner. On May 18, 1963, she was married to Henry Lee "Junior" Adams who preceded her in death on May 5, 1999. She was also preceded in death by her parents; two brothers, L. C. Waggoner and Ray Waggoner; and one half-sister, Thelma Howard. LaVerne was a homemaker and attended the Gates of Praise Tabernacle. She enjoyed baking and visiting with family and friends. She was a wonderful wife and mother. She is survived by her son, Larry Caleb Adams of Glenwood; two sisters-in-law, Betty Barentine of Glenwood and Ida Whitton of Kansas City, Missouri; and numerous nieces and nephews. Services will be held at 2:00 PM, Sunday, February 9, 2014 in the Davis-Smith Funeral Home Chapel in Glenwood with Bro. Vernon Wehunt and Bro. Eric Wehunt officiating. Visitation will be Saturday evening, 6:00 PM until 8:00 PM. Interment will be in the Bethel Cemetery. Pallbearers will be Todd Barentine, Dalton Barentine, James Barentine, Roger Carter, David Barentine and Craig Poirier. Guest registry is at www.davis-smith.com.

To order memorial trees or send flowers to the family in memory of LaVerne Adams, please visit our flower store.