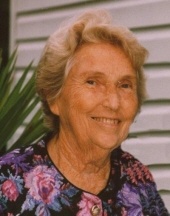 LaVerne Trout, age 87, of Daisy, died Monday, September 30, 2013. She was born on July 23, 1926, at Daisy, the daughter of Douglas Jones and Lena Mitchell Jones. On December 14, 1945, she was married to Paul C. Trout who preceded her in death on March 23, 2006. She was also preceded in death by her son, Johnny Paul Trout; one brother; and four sisters. She was a retired camp ranger for Camp Tula of the Boy Scouts of America. She was a member of the Lodi Free Will Baptist Church where she was active in the Women's Auxiliary. She is survived by three children and their spouses, Sharyn and Jimmie Harmon, Madonna Meadors, all of Hot Springs and Tim and Melanie Trout of Daisy; her sister, Barbara Cook of Uniondale, Indiana; five grandchildren and their spouses, Kelley and Robbie McClain, Krissy and Brad Snodgrass, Kim Burkes and Morgan Trout, all of Hot Springs, and Nicole and Brad Taylor of Conway; seven great-grandchildren; one great-great-grandchild; several nieces and nephews; and many friends. Graveside services will be held at 2:00 PM, Thursday, October 3, 2013, in the Mount Joy Cemetery with Bro. Kevin Jewell and Bro. David Taylor officiating. Visitation will be Wednesday, 5:00 PM until 7:00 PM. Arrangements are under the direction of Davis-Smith Funeral Home, Glenwood. Pallbearers will be grandsons. Guest registry is at www.davis-smith.com.

To order memorial trees or send flowers to the family in memory of LaVerne Trout, please visit our flower store.