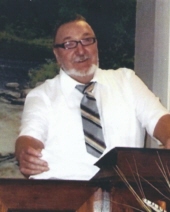 Larry A. Welch, age 70, of Glenwood, passed away on Sunday, April 24, 2016. He was born on March 1, 1946 in Hot Springs, the son of James Thomas Welch and Otha Pearl Dunlap Welch. On January 20, 1978, he was married to Joy Rowland. He was preceded in death by his parents; one brother, Curtis Welch; one sister, Emiloye Welch; and one nephew, Danny Welch. A Missionary Baptist minister, he had pastored New Bethel Missionary Baptist Church in Hot Springs since May, 2000. He had also pastored churches at Alamo, Alpine and Pike City. Larry was also a retired sawmill worker. He is survived by his wife, Joy Welch of Glenwood; three children and their spouses, Darlene and James Crawford of Batesville, Brandon and Casandra Welch of Ashdown and Bethany Welch of Glenwood; three grandchildren, Ashley Crawford, Jason Crawford and Nicole Welch; two brothers and three sisters-in-law, Winnie Welch of DeQueen, Tommy and Sheryl Welch of Glenwood and Gary and Alverene Welch of Dierks; one sister and brother-in-law, LouAnn and Boogie Huddleston of Dierks; and several nieces and nephews. Services will be held at 2:30 PM, Saturday, April 30, 2016, in the Mount Pisgah Missionary Baptist Church with Bro. Gary Welch and Josh Welch officiating. Visitation will be held on Friday, 5:00 PM until 7:00 PM, at Mount Pisgah Missionary Baptist Church. Interment will be in Mount Tabor Cemetery under the direction of Davis-Smith Funeral Home, Glenwood. Pallbearers will be Robert Huddleston, Richard Huddleston, Ricky Godwin, Terry Welch, Jesse Lawrence and Steve Finney. Guest registry is at www.davis-smith.com.

To order memorial trees or send flowers to the family in memory of Larry A. Welch, please visit our flower store.