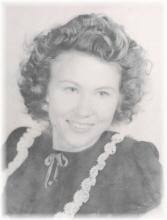 Lavell "Jo" Reynolds, age 91, of Glenwood, passed away on Tuesday, February 2, 2016. She was born on December 30, 1924 at Newhope, the daughter of Henry Grady Carpenter and Annie Myrtle Henry Carpenter. She was preceded in death by her husband, Thomas Jackson Reynolds, Jr.; and her son, Wallace LaFevers. She was a homemaker, enjoyed cooking and especially baking pies. She is survived by four children, Larry LaFevers of Bluffton, Indiana, Sabra Cleveland of Little Rock, Bobby LaFevers of Huntington, Indiana and Ricky Reynolds of Glenwood; ten grandchildren; several great-grandchildren; and her brother, Junior Carpenter of Glenwood. Services will be held at 2:00 PM, Saturday, February 6, 2016, in the Davis-Smith Funeral Home Chapel, Glenwood, with Bro. Bobby Lock officiating. Interment will be in the Bethel Cemetery. Guest registry is at www.davis-smith.com.

To order memorial trees or send flowers to the family in memory of Lavell "Jo" Reynolds, please visit our flower store.