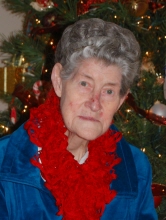 Lena Mae Helms, age 88, of Mount Ida, passed away Wednesday, May 27, 2015. She was born on April 5, 1927, in Mount Ida, the daughter of Granston Ross Alexander and Dolly Brown Alexander. On August 11, 1945, she married the love of her life, Wylie Helms who preceded her in death on March 31, 1964. She was also preceded in death by her infant son, Baby Helms; her parents; one granddaughter; one great-granddaughter; two great-grandsons; three sisters, Bessie Ward, Myrtle Cobb and Oma Scott; three brothers, Morris Alexander, Walter Alexander and Tommy Alexander. She was a member of Faith Tabernacle in Mount Ida. She enjoyed cooking, camping at deer camp and fishing. Her favorite times were traveling with gospel singing groups and performing in many different places. She is remembered most for her Bible reading and raising her children alone after the passing of her husband. She dearly loved her family and will be greatly missed by all that knew her. She is survived by four sons and two daughters-in-law, G.W. and Colleen Helms of Mount Ida, Larry and Brenda Helms, Gary Helms and Terry Helms, all of Norman; four daughters and two sons-in-law, June and Doyne Alexander of Black Springs, Linda Todd and Alice Diggs, both of Hot Springs, and Janet and Roger Van Deest of Hatfield; twenty-one grandchildren; thirty-one great-grandchildren; seven great-great-grandchildren, and numerous nieces, nephews, extended family members and a host of wonderful friends. Services will be held at 2:00 PM, Tuesday, June 2, 2015 at Faith Tabernacle in Mount Ida with Bro. Donnie Ponder and Bro. Mark Lyle officiating. Visitation will be Monday evening, 6:00 PM until 8:00 PM, at the church. Interment will be in the Owley Cemetery under the direction of Davis-Smith Funeral Home, Glenwood. Pallbearers will be grandsons. Honorary pallbearers will be L. J. Warneke, Ray Raines, Lynn Black, Lynn Ward, Dickie Fryar, Bruce Ball, Dr. Fox and the staff of Ouachita Regional Hospice. Memorials may be made to Project Pink Awareness of Montgomery County, P.O. Box 695, Mount Ida, AR 71957. Guest registry is at www.davis-smith.com.

To order memorial trees or send flowers to the family in memory of Lena Mae Helms, please visit our flower store.

Visitation will be held in the Faith Tabernacle in Mount Ida.