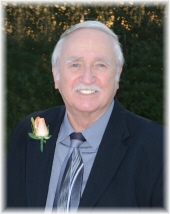 Leroy Funderburk, age 76, of Daisy, passed away on Thursday, February 11, 2016. He was born on September 25, 1939 in Kirby, the son of Leon Travis Funderburk and Mary Magdalene Garner Funderburk. On June 25, 1960, he was married to Patricia Draper. He was retired from the Briar Plant and a member of the Daisy Church of Christ where he formerly served as a song leader for many years. He loved country music. He was the band leader of the Daisy Drifters and a member of the Wild Card Band. He is survived by his wife, Patricia Funderburk of Daisy; four children and their spouses, Cherry and Larry Mantooth of Kirby, Lisa and Dean Sutton of Glenwood, Scotty and Darla Funderburk of Daisy and Candi and Jason Golden of Langley; nine grandchildren, Dustin Mantooth, Monica Wright, Laci Patton, LeeAllen Sutton, Stephen Funderburk, Shawn Funderburk, Jace Golden, Lance Golden and DeShala Golden; four great-grandchildren, Landon Patton, Alexis Patton, Landon Wright and Holli Ann Golden; four siblings, Wallace Funderburk of Crystal Springs, Clara Faye Babbitt of Benton, Raymond Funderburk of Arkadelphia and Patricia Pedron of Kirby; and several nieces and nephews. Services will be held at 2:00 PM, Sunday, February 14, 2016, in the Davis-Smith Funeral Home Chapel, Glenwood, with Roger Cox and Pete Pedron officiating. Visitation will be Saturday, 6:00 PM until 8:00 PM, at the funeral home. Interment will be in the Mount Joy Cemetery. Pallbearers will be his grandsons. Guest registry is at www.davis-smith.com.

To order memorial trees or send flowers to the family in memory of Leroy Funderburk, please visit our flower store.