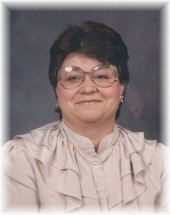 Louise Franklin, age 70, of Rosboro, died Sunday, May 3, 2015 at her home. She was born on February 8, 1945 near Amity, the daughter of Albert Ernest Franklin and Jessie May Chancellor Franklin. She was preceded in death by her parents, four brothers, Jimmie Franklin, Roland "Windy" Franklin, Joe Franklin and Charles Herbert Franklin; and two sisters, Nancy Franklin and Alice Franklin Price. After graduating high school on a Friday night in May of 1963, she went to work the very next Monday for the Indianapolis Glove Factory where she remained a faithful employee for the next 46 years. She is survived by her brother, Lloyd Franklin of Houston, Texas; two sisters, Linda Watts and Brinda Franklin, both of Rosboro; and several nieces and nephews, including the four she helped raise, Karen Watts, Kaytie Watts Flowers, Danny Watts and Russell Watts. Services will be held at 10:00 AM, Wednesday, May 6, 2015, in the Davis-Smith Funeral Home Chapel, Glenwood, with Bro. Glen Harris officiating. Visitation will be Tuesday, 6:00 PM until 8:00 PM. Interment will be in the Jones Cemetery at Amity. Pallbearers will be Danny Watts, Russell Watts, Michael Flowers, Darrell Franklin, Michael Price and Jeffrey Price. Honorary pallbearers will be Karen Watts, Kaytie Watts Flowers, Kristin Jeffries and Mike Carpenter. Guest registry is at www.davis-smith.com.

To order memorial trees or send flowers to the family in memory of Louise Franklin, please visit our flower store.