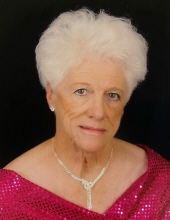 Marcella Jane Bridgers Rutherford, of Caddo Gap, passed away Monday, September 1, 2020. She was born on November 22, 1940 in Birmingham, Alabama; the daughter of Tom B. Bridgers and Leona Tackett Bridgers. In 1968 she married Larris Andrew Rutherford; preceding her in death on April 7, 2014. She was also preceded in death by her brother Larry Bridgers and her sister LaNell Bridgers Coslin.

Marcella was a 1958 graduate of Caddo Gap High School, where she excelled at playing basketball and developed her love for the sport. She worked hard to remain an independent entrepreneur while building her family, with the addition of her son Andy in 1974. They owned and operated Rutherford’s Auction Barn, an antique mall, a bed & breakfast, and Marcella’s Antiques in Canton, Texas. They enjoyed traveling the United States buying and selling antiques. After her husband’s death, Marcella relocated to Caddo Gap, Arkansas. She was a member of the Caddo Gap Baptist Church and involved with the Glenwood Senior Adult Center. She purchased the old bank in Caddo Gap, restoring its historical beauty, and made it her home. Marcella was also known to some as the “Quilt Lady” since she sold tens of thousands of quilts over her lifetime. She also made many friends in Glenwood and surrounding areas selling trailers loads of camouflage clothing, and also called the “Camo Lady”. She had a vivacious and outgoing personality, a powerful spirit that filled a room, and was a strong, classy, confident, hard-working, self-made woman who absolutely adored her family.

She is survived by her son and daughter-in-law, Andy and Jennifer Rutherford of Carrollton, Texas; her granddaughter that made her life complete, Piper Renee Rutherford; her brother and sister-in-law, Tommy and Melba Bridgers of Duncanville, Texas; her sisters and brothers-in-law, LaQuetta and John Klinge of Caddo Gap and Pat and Mike Packard of Duncanville, Texas; and many nieces and nephews.

A small private service will be held by her family in Caddo Gap, Arkansas.

Guest registry is at www.davis-smith.com

To order memorial trees or send flowers to the family in memory of Marcella Jane Bridgers Rutherford, please visit our flower store.