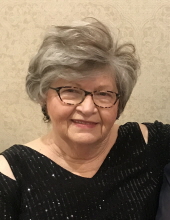 She was born on February 15, 1943, in Carthage, the daughter of Carroll Bernard Green and Frances Leona Rogers Green. On August 16, 1958, she married Carl Wayne Ritter, who preceded her in death on February 17, 2004. She was also preceded in death by her parents; and three brothers, Roger Green, Claude Green and Fred Green.

Kay attended First Baptist Church, Royal. After the death of her husband, she went back to school to receive her GED, at the age of 63, which Kay and her family were extremely proud of. She retired from the Arkansas Career Training Institute where she worked as an administrative assistant.

She enjoyed traveling, painting, sewing, writing poetry, shopping, flea markets and Facebook, and she was known as Chico’s number one customer. Her greatest joy was spending time with her children, grandchildren, great-grandchildren and extended family.

A private service and interment will be held under the direction of Davis-Smith Funeral Home, Hot Springs.

To order memorial trees or send flowers to the family in memory of Margaret Kay Ritter, please visit our flower store.