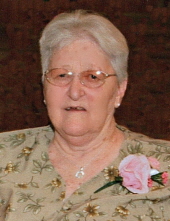 She was born on September 28, 1935, in Kirby, the daughter of William Clarence Brewer and Dellarnee Merritt Brewer. She was preceded in death by her son, Danny Welch.

Before her retirement, she worked for fifteen years as a cook at the Kirby Restaurant. She enjoyed crocheting, quilting and tending to her plants and flowers. She was a Baptist in her faith.

She is survived by her daughter, Paula Welch of Section, Alabama; her son Terry Welch of Glenwood; four grandchildren and their spouses, Matthew Musser, Chris and Nikki Musser, Heather and Dan Funderburk and Jason and Stephanie Welch; four great-grandchildren; her brother, Wayne Brewer of Royal; and her sister, Carolyn Golden of Kirby.

Graveside services will be held at 10:00 AM, Wednesday, July 7, 2021, in the Ebenezer Cemetery with Dewight Mack and Dewayne Mack officiating.

To order memorial trees or send flowers to the family in memory of Margaret Latonia Welch, please visit our flower store.