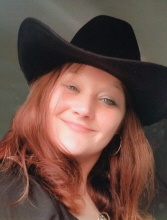 Maria Cogburn, age 34, of Little Rock, passed away on Thursday, February 13, 2020. She was born on November 27, 1985 in Hot Springs, the daughter of A. J. and Vernetta Cogburn. She was preceded in death by her sister, Cristal Cogburn. She loved being with her children and enjoyed fishing and being on the lake. She is survived by her husband, Doug Mellon of Little Rock; three children, Noah Gray, Dalton Gray and Breanna Gray; her parents, A. J. and Vernetta Cogburn; two brothers, Jason Cogburn and Truman Cogburn, all of Glenwood; and two nephews, Collin Cogburn and Conner Cogburn. Visitation will be held Wednesday, 6:00 PM until 8:00 PM, at the funeral home. Private memorial services will be held at a later time by the family. Arrangements are under the direction of Davis-Smith Funeral Home, Glenwood. Guest registry is at www.davis-smith.com.

To order memorial trees or send flowers to the family in memory of Maria Cogburn, please visit our flower store.