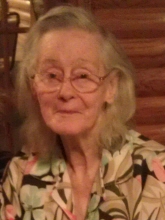 Maudine Horn, age 83 of Amity, died Thursday, March 22, 2012. She was born on February 26, 1929, at Rosboro, the daughter of Bill Thornton and Hattie Hale Thornton. On October 6, 1950, she was married to Clovis Horn who preceded her in death on July 10, 1986. She was a member of the Kirby Primitive Baptist Church. She is survived by three children and their spouses, Patsy and Ricky Waggoner of Hot Springs, Jerry and Bonnie Horn of Amity and LaDonna and Darrell Whisenhunt of Kirby; five grandchildren and their spouses, Jeffery and Beth Waggoner, Crystal and Joe Godwin, Gale and Matt Cearly, Amy and Curtis Morris and Jeremy and Tanya Horn; eight great-grandchildren; one brother, John Thornton of Malvern; and two sisters, Claudine Capps of Hobe Sound, Florida and Jodie Smith of Prescott. Graveside services will be held at 10:00 AM, Saturday, March 24, 2012, in the Bethel Cemetery with Bro. Bobby Lock officiating. Visitation will be held Friday evening, 6:00 PM until 8:00 PM, at the funeral home. Arrangements are under the direction of Davis-Smith Funeral Home, Glenwood. Guest registry is at www.davis-smith.com.

To order memorial trees or send flowers to the family in memory of Maudine Horn, please visit our flower store.