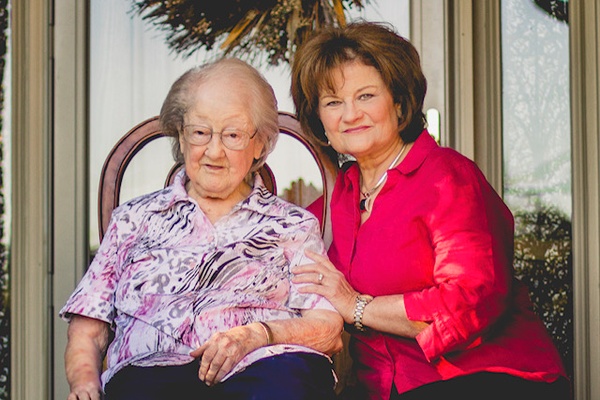 Melba Ailene Meggs Wilson Bollinger was born on October 20, 1924, in El Dorado, Union County, Arkansas to Johnnie Meggs and Lena Slaughter Meggs. She and her six siblings attended school in the area, where she would eventually graduate from Parker’s Chapel High School.

After high school, she took a position in the administration office of the World War II ordnance plant in nearby Camden during the war years, where she eventually met and married Harold Muscles Wilson on December 20, 1945.  Six years later in March of 1951, they had one child, a daughter named Janet.

Melba and Harold made their home in Camden for several years where Harold worked for International Paper but moved to Pine Bluff in 1958 when the new mill opened there.

Having come from a family that had natural musical talent running through it, Melba shared in that talent and in her spare time, she enjoyed playing the piano by ear. After obtaining an old upright piano from Harold’s sister, she would spend many hours playing popular and gospel songs for her own enjoyment as well as entertaining friends and family.

The Christian teaching of her strict Pentecostal mother did not take root early on in her life, having been raised with her family in the local Assembly of God church.  Those seeds were planted in her heart, but they would not come to fruition for many more years.  After suffering hardship in her personal life, she went to her mother’s house in El Dorado seeking refuge from her troubles and, by her testimony, was in a place of brokenness.  Needing God’s intervention and help in her life, she knelt by her bed and quietly said, “God, if you are there, I need help.”  She felt a heavy load lift off that had been there for a very long time.  She fell asleep and when she woke up, she realized that something was different and that she had surely been saved at the age of 40.

Melba later moved to Jacksonville/North Little Rock with Janet and started attending Christian Assembly in Sherwood during the years of Pastor Kerry Kyzer’s tenure.  There wasn’t a baptistry yet at the new church, so Pastor Kyzer borrowed the baptistry of another church in Gravel Ridge and he baptized Melba there. She was on fire for the things of God and studied the Scriptures for many hours a day.  In those days, there were many excellent teachers and preachers of the Gospel on the radio, and she listened daily to every program she could.  She faithfully attended Christian AG for many years until she was no longer able.

During this time when she was in her late 50’s, she got a job at Target overseeing the dressing room.  It was her pride and joy as well as her place of ministry where she would pray for people who came in to try on clothes and would have conversations with her about their particular need or hardship in life. She was quick to quote a Scripture or two and touch them with her hand to offer a prayer.  This is what she lived for and loved every minute of it and worked there faithfully for seven years until her retirement.

Melba had a strong, unwavering faith in God to heal, deliver and set free. She met every obstacle with faith-filled prayer and belief in the Lord’s Will to answer and maintained that faith til the end.

Melba was preceded in death by her parents, Johnnie and Lena Meggs, brothers Wylie Meggs and Webster Meggs, sister Evie Brasher, all of El Dorado, and sister Ruby Vance Harris of Pine Bluff, and her two husbands, Harold and Gene.

A graveside service will be held at 11:00 AM on Thursday January 13, 2022, at Riverwood Cemetery in Maumelle, AR with visitation one hour prior at the cemetery.

To order memorial trees or send flowers to the family in memory of Melba Bollinger, please visit our flower store.
Send a Sympathy Card