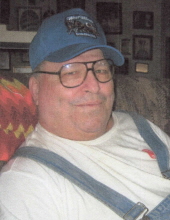 He was born on January 20, 1948 in Houston, Texas, the son of Michael “Monk” Louis Carter, III and Hazel Florence Hoglan Carter. He was preceded in death by his parents; his brother, Johnny Dale Carter; and two sisters, Barbara Jean Carter Laas and Junita “Juanita” Marie Carter.

Mike was truly a professional truck driver. During the 90’s, he deliberately wrecked his truck in order to avoid hitting a van which was full of people. These actions saved those lives but left him with severe back injuries. He enjoyed playing dominoes, watching football and drinking Dr. Pepper. Mike was a Baptist in his faith.

He is survived by his son, Frankie J. Carter; his niece, Gloria Jean Martin; his uncle, Freddie Roy Hoglan; his aunt, Ina Ruth Sulzer Hoglan; and lots of cousins.

Graveside services will be held at 10:00 AM, Wednesday, June 17, 2020, in the Old Talihina Cemetery, Talihina, Oklahoma under the direction of Davis-Smith Funeral Home, Glenwood.

To order memorial trees or send flowers to the family in memory of Michael Louis Carter, please visit our flower store.