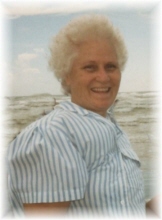 Mildred Golden, age 85, of Kirby, died Wednesday, December 18, 2013. She was born on February 6, 1928, at Cowhide Cove near Kirby, the daughter of Reuel Funderburk and Lucy White Funderburk. On November 2, 1944, she was married to Lindsey C. Golden who preceded her in death on April 18, 2013. She was also preceded in death by four brothers, Roy Funderburk, Earl Funderburk, Ray Funderburk and Leon Funderburk; and her sister, Vera Mae Raines. She was a member of the Kirby Church of Christ. She is survived by two sons, Travis Golden and Leslie Golden, both of Kirby; her goddaughter, Tammy Golden of Glenwood; her granddaughter, Julia Pry Golden of Kirby; and four great-grandchildren, Braylee Hill, Haden Pry, Parker Pry and Christa Pry. Services will be held at 2:00 PM, Sunday, December 22, 2013, in the Davis-Smith Funeral Home Chapel, Glenwood, with Billy Golden and Harloe White officiating. Visitation will be Saturday, 6:00 PM until 8:00 PM. Interment will be in the Glenwood Cemetery. Pallbearers will be Billy Greenlee, John Tolleson, Charles Yeargan, Larry Mantooth, Donnie Reid and Jay Ray White. Honorary pallbearers will be Leroy Bailey, Clint Turner and Mark Ligon. Guest registry is at www.davis-smith.com.

To order memorial trees or send flowers to the family in memory of Mildred Golden, please visit our flower store.