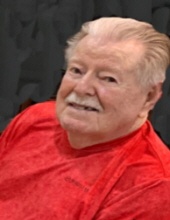 Norvil retired after 45 years with ROHR Industries in California beginning as a welder and eventually a supervisor. He was a United States Navy veteran of World War II and a member and deacon of the Glenwood Free Will Baptist Church. An excellent carpenter, he enjoyed woodworking and “tinkering” on his cars.

Services for Norvil and Emogene Scott will be held together at 10:00 AM, Saturday, November 13, 2021, in the Davis-Smith Funeral Home Chapel, Glenwood, with Bro. Ron Parker, Bro. Joe Ray Short and Bro. Brian Hill officiating. Military honors for Mr. Scott will be conducted by the United States Navy Honor Guard with the flag presented to his oldest grandson, Matthew Scott.

Visitation for the Scotts will be Saturday, 9:00 AM until service time.

Honorary pallbearer will be Darrell Townsend.

The family would like to say a special thank you to Chrissy, Lori and Rev. Jim at Saline Memorial Hospice and especially to Tracy at Pleasant Hill Senior Services.

The services will be livestreamed and you may join by using the following link:

To order memorial trees or send flowers to the family in memory of Norvil Scott, Jr., please visit our flower store.