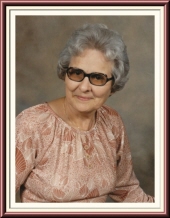 Ollie Bobo Hays, age 90, of Norman, passed away on Sunday, July 31, 2016. She was born on August 14, 1925 in Black Springs, the daughter of Charles Robert "Bob" Bobo and Deva Arnold Bobo. On October 12, 1945, she was married to Jurdon E. Hays who preceded her in death on August 5, 1996. She was also preceded in death by her parents; her brother, C. W. Bobo; and her sister, Catherine Moyers. She was a member of the Black Springs Baptist Church. She enjoyed quilting, crocheting, cooking, canning and working in her garden. She is survived by two children and their spouses, Donna and Kenneth Brunt of Bryant and David and Pennie Hays of Port Arthur, Texas; eight grandchildren; fifteen great-grandchildren; her brother, Jerry Bobo of Norman; her sister, Occo Campbell of Mount Ida; and several nieces and nephews. Services will be held at 10:00 AM, Wednesday, August 3, 2016, in the Black Springs Baptist Church with Bro. Kirk Stewart officiating. Visitation will be Tuesday, 6:00 PM until 8:00 PM, at the funeral home. Interment will be in Black Springs Cemetery under the direction of Davis-Smith Funeral Home, Glenwood. Guest registry is at www.davis-smith.com.

To order memorial trees or send flowers to the family in memory of Ollie Bobo Hays, please visit our flower store.