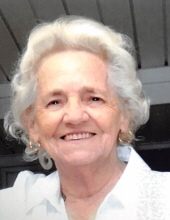 She was born on January 31, 1934, in Hot Springs, the daughter of William “Mac” McKinley Naven and Esther Rassberry Naven. On April 10, 1950, she married E.B. “Bud” Moppin, who preceded her in death in 2007. She is also preceded in death by her parents; a daughter, Billie Alene Ennis; a granddaughter, Lajuana “Cookie” Collum; three brothers, John “Pat” Naven, William “Butch” Naven and Fred Naven.

Maxine was a Christian in her faith and a Missionary Baptist. Mom cared for her family and her church and they meant everything to her. When we told her “we loved her” she always responded with “I love you more”. She will be greatly missed by all who knew her and loved her.

Funeral services will be held on Tuesday, January 26, 2021, at 2:00 PM with Bro. David Roark officiating in the Davis-Smith Funeral Home Chapel, Hot Springs.

Interment will be in the Morning Star Cemetery.

We would like to express our gratitude to all the nurses and staff from Arkansas Hospice for the wonderful care they showed mother.

To order memorial trees or send flowers to the family in memory of Opal "Maxine" Moppin, please visit our flower store.