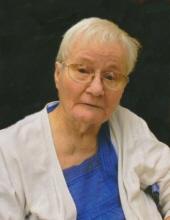 Oxie Dell Qualls, age 85, of Mount Ida, died Friday, July 25, 2014. She was born on October 16, 1928, in the Muddy Creek area near Story. On October 16, 1948, she was married to Neuman Riley Qualls. She was preceded in death by her mother, Maude Potter. As a young girl, she pulled her little sack behind her mother's cotton row and earned enough money to buy her first doll. After her marriage to Neuman, they purchased 142 acres in the Alamo community where they lived, along with her mother. She was baptized on July 4, 1948 and became a member of the Muddy Creek Church of God. She is survived by her husband, Neuman Qualls of Mount Ida; her son and daughter-in-law, Dewayne and Edie Qualls of Atkins; her daughter and son-in-law, Debbie and Floyd Spencer of Albuquerque, New Mexico; and two granddaughters, Amanda Freeman of Hector and Melissa Spencer Basu and her husband, Raj, of Cambridge, Massachusetts. Services will be held at 10:00 AM, Wednesday, July 30, 2014, in the Muddy Creek Church of God with Bro. Bud Wilburn officiating. Interment will be in the Reed Cemetery under the direction of Davis-Smith Funeral Home, Glenwood. Pallbearers will be Loyd Smith, Johnny Ray Smith, Tommy Johnston, Neil Johnston, Mervin Lambert and Morgan Lambert. Guest registry is at www.davis-smith.com.

To order memorial trees or send flowers to the family in memory of Oxie Dell Qualls, please visit our flower store.